Kosher Info:
There are two walk-in kosher restaurants in Warsaw. 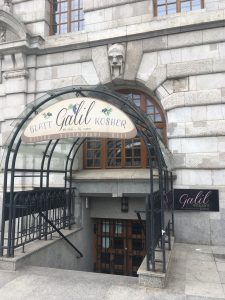 As is true in much of Europe, it’s always good to call ahead of time to make sure any restaurant is open when you want to go and ensure that it is not closed for a group, event, or for any other reason.

Galil Restaurant, on Zielna 37, is a sit down meat restaurant with waiter service in the area of the old ghetto. The food is very good, and prices are reasonable for the American or European traveler (but a little high for Poland which is overall a very cheap destination). You have to get in through the main entrance of the building, to the left of the awning with the sign (don’t go down the stairs.) Note that it is cash only and reservations are recommended.

Bekef is a meat falafel place on Hoża 40 that I heard an Israeli say had “the best hummus in the world,” but they were closed when we tried to go.

Kosher Delight is really a catering hall, but you can pre-order sit down meals, and they do allow you to walk in during the summer. They give you a choice of meat or chicken along with lots of salads, side dishes, and soup. It is about $25 per plate. They also offer Shabbat meals for $30 per meal.

The Nozyk shul hosts Shabbat meals for a small fee. The food is not much, but it’s cheap and it’s nice to be in this area and attend services here for Shabbat. There is also a small grocery shop located in the synagogue at the side entrance. There are a number of hotels in the area, and there are also apartments available through airbnb. The best way to enter the courtyard to the synagogue is to walk through the grove of trees between 5 and 5a Grzybowska St. which leads to the back of the shul.

The Chabad of Warsaw also hosts Shabbat meals. They are located a bit farther away from the rest of the kosher places, but still centrally located.

The Jewish Community of Warsaw has a good pdf guide available for the English speaking traveler. This includes information for contacting the Nozyk Shul and arranging Shabbat meals.

All UHT milk without additives is kosher. For fresh (ie refrigerated) milk, OSM Garwolin milk 2% and 3.2%, and Mlekovita milk 2% are kosher.

A list of kosher products in Poland, including Wawel chocolate, can be found here.

Jewish Info:
When thinking Jewish travel, Warsaw is not often the first city that comes to mind. People tend to think of Poland as a graveyard and basically go to visit the camps and other sites of Jewish destruction. But Warsaw is a good example of the bitter past and better future for Poland, both Jewish and non-Jewish.

The Poland of today is not the same as the Poland of 1939, and many changes have occurred. Since the fall of the Nazis, and later Communism, Poland has had a rethinking of its Jewish past. For centuries until the Holocaust, Poland was a welcome haven for Jews. It was not by accident that Poland had the largest Jewish community in Europe in 1939, and Warsaw was the second largest Jewish city in the world at that time, after New York. 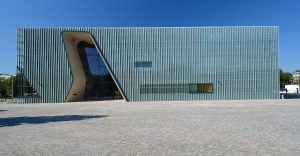 The POLIN is the museum of the History of Polish Jews. Over $300 million was spent from various sources building a museum that tells the story of 800 years of Jewish life in Poland. This was the largest sum of money ever spent on any cultural institution in Polish history. It is possibly the best Jewish museum anywhere in the world. It truly spans the complete history of the Jews in Poland, from displays explaining the differences between the Baal Shem Tov and the Vilna Gaon to a multimedia presentation of a day in the life of the Volozhin Yeshiva. It can take 4-5 hours to see the whole museum. This museum alone would make a visit to Poland worthwhile. Some have criticized it for only having one section about the Holocaust, but it is not primarily a Holocaust Museum. Rather, it was built to document and celebrate the lives of the Jews of Poland. Across from the entrance to the museum is the Monument to the Ghetto Heroes. 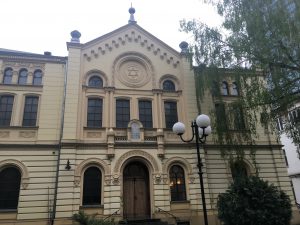 is the only shul in Warsaw out of 400 to have survived the war. They have daily and Shabbat services, and davening there makes you feel a personal victory over the Nazis. It is also open for visitors at other times.

While most of Warsaw was completely destroyed in the 1943 Ghetto uprising and the general Warsaw uprising of 1944, some snippets of the Ghetto remain. Every visit to Warsaw should include these sites. A number of tour companies run “Jewish Warsaw” walking tours, and it is highly recommended to take one of these, but you can also do a self-guided tour. Sites on such a tour will include: markers where the former ghetto wall was; the site of the old grand synagogue (destroyed by the Nazis); Umschlagplatz from where the Jews were deported to Treblinka; and sites associated with the Warsaw ghetto uprising such as Mila 18, the bunker where Mordechai Anielewicz and his brave Jewish resistance fighters fought their last battle and perished. Not far from this area is a Jewish cemetery that is worth a visit.

There is another section of the ghetto not found on most regular tours. In this area you can find a remnant of the ghetto wall in a private courtyard at Zlota 62. It is open to the public during daylight hours, but visitors are asked to please respect the privacy of those who live there. After visiting the wall you can walk over to Park Świętokrzyska and see the monument to Janusz Korczak, the brave hero who watched over the orphans of the Warsaw Ghetto and went with them on the train to Treblinka. 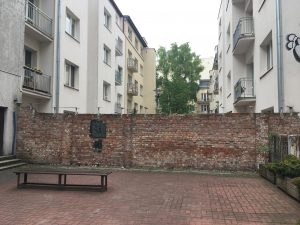 The Poles consider him a saint, and they leave flowers and candles there like they would at Catholic sites. Nearby is also the remnant of the footbridge on Chlodna St which connected two sections of the ghetto. Prozna St is the only street left from the Ghetto. The city of Warsaw kept the buildings exactly as they were when the ghetto was destroyed, but is now remodeling some of them. Just across the plaza they are constructing a new Jewish cultural center. An easy way to visit these sites on your own if you don’t want to hire a tour guide is to pick up a free booklet called “Warsaw Judaica” at any tourist information site. It has a map and detailed descriptions.

Across the Vistula River is the Warsaw Zoo and the Villa of Jan and Antonina Zabinski, Righteous Gentiles who hid Jews in their villa and even some of the animal enclosures during the war, as depicted in the movie The Zookeeper’s Wife.

From Warsaw you can day trip to Lublin and Majdanek. Lublin is another must do in Poland for the Jewish traveler, though the train is slow and takes almost 3 hours each way. When we arrived in Lublin we took a bus (you can also take a taxi) to Majdanek. Unlike the other camps, Majdanek is in the city of Lublin and not in the middle of nowhere. It is also the only camp that is intact (rather than being destroyed by the Nazis to hide their crimes) as the Soviets overran it in 1944. I cannot describe in words what it was like visiting Majdanek. We were overcome when we walked into the gas chamber and had to leave fairly quickly. We felt the evil in that room. The other really horrifying thing in Majdanek is the mausoleum. They built a mausoleum of the ashes (you can even see bone fragments.) The mound under the mausoleum was about 15” high. If you are a Kohen you need to avoid the mausoleum. I don’t think there are any other problems for Kohanim in the rest of the site. We must never forget what happened.

After Majdanek we took a bus to Yeshiva Chachmei Lublin, or the Hotel Ilan. The Polish government gave it back to the Jewish community of Warsaw, and they run the building. There is still a Beis Midrash there and a shul, but it is mostly a hotel and restaurant. There are several restaurants there, and you have to ask for the Kosher one. The “restaurant” is the caterer Kosher Delight, the same as the ones in Warsaw and Krakow. There was no menu we could choose from, but they served us a salad with a main dish Of Goulash (Which was delicious.) I do not know about minyanim or Shabbos in Lublin as we were not there at that time. We did see Orthodox people there, but I don’t know if they had enough for a minyan. 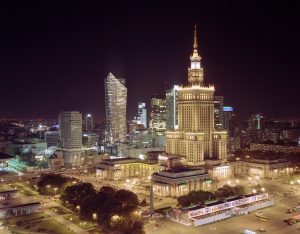 Tourist Info:
After having been completely destroyed by the Nazis in WWII as revenge for the two uprisings, Warsaw today is a bustling and cosmopolitan city that is well worth a couple of days to explore. There are modern skyscrapers joining the famous Palace of Culture and Science to take over the skyline. The city has many pretty parks as well as a number of great places for strolling and sightseeing, such as the Royal Way and Nowy Swiat. All over Warsaw you can find spots that mark the former path of the Ghetto Wall and markers with maps of the Ghetto telling the story of that particular spot.

Warsaw’s Old Town has been completely rebuilt as it was before the war. Some see this as less “authentic” than Krakow’s Old Town, but it is still a great place to walk around and marvel at how it has been restored. Walking tours are highly recommended, and there are a number of “free” (meaning tip-based) tours on a variety of topics. In the nearby “New Town” you can find the childhood home of Marie Curie, who was born in Warsaw.

A popular museum is the Warsaw Uprising Museum. The uprising documented here is not to be confused with the Ghetto uprising that took place in 1943, in response to which the Ghetto was leveled and the Jews deported to Treblinka and other camps. in 1944, one year after that uprising, the people of Warsaw rebelled against their Nazi occupiers, with tragic results. Their story is told in this museum. 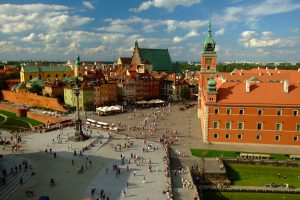 Children would probably enjoy the Copernicus Science Center, with many hands-on exhibits.

Warsaw is a very walkable city with good public transportation, but if you want to jump around to sites further out (such as the zoo), Uber is available and extremely cheap.

If you’re also seeking to visit Krakow, read this post.