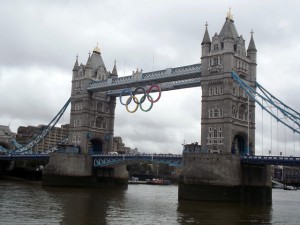 With the Jubilee celebrations in June, and the Olympics and Paralympics less than a week away, there has never been a better time to visit London. As a native Londoner here is a brief guide to where to eat and what to do during your stay, and where to find more information.

The most dedicated sports fans will be able to purchase and order kosher food during the games, with sandwhiches and other products from Kosher Suppliers being available at the main site. The London Organising Committee for the Olympic Games (LOCOG) has ensured that in planning menus and food options at Olympic Venues, consideration has been given to kosher dietary laws. If bringing food to the Olympic venues from outside, don’t plan on bringing any liquids into the Olympics, you will be able to bring a small amount of food in a small backpack, following guidelines set out on your ticket. Corporate ticket holders in the corporate entertaining areas will also have kosher food available to them. For tourists and locals with smartphones, downloading the Kosher Food application listing all foods certified Kosher in the UK will assist with choosing suitable products (KLBD Kosher London App) that are available at the venues.

Avoid bringing food with you into the Olympic venues. They may allow it if it fits inside your bag, but be prepared to lose it if security doesn’t allow it. Review the London Olympics security info here.

When keeping kosher in London, the hardest decision will be where to eat, with so many great options available throughout the city. There are more kosher restaurants in the London area…  We are giving our recommendations below.

Other kosher restaurants include:

London is welcoming over one million people for the Olympics so public transport, the roads, and walking are all going to be much busier than normal. This applies especially to the areas hosting Olympics events, including Hyde Park, Wimbledon, Horse Guards Parade, Wembley, and the Olympics Site.

The London 2012 Festival is bringing world-renowned performers from around the world to London, and many events are scheduled until late September, including hundreds of free performances.

Go sightseeing around London. Places of interest include:

A tip on getting from the airport to the city centre: Taking a black taxi can cost well over £50 ($100). So as a single/business traveler the express trains from Heathrow/Gatwick/Stansted is more suitable. If in less of a rush the Heathrow Connect service are also worth considering if you are less rushed, as these service is tremendously efficient, and get you into Paddington which connects on the underground “the tube” easily. The Easybus service is also tremendously efficient and needs to be booked in advance, connecting from Baker Street to the main airports. Getting to London is also easier with plenty of affordable airline tickets into the city.

London has a diverse Jewish scene, and the community is use to recieving tourists, visitors and business travellers throughout the year. Don’t be shy to book a ticket and turn up to a couple of events to meet the local london community and other travellers and visitors to London. Both Chabad and Centre for Jewish Life offer many opportunities to network and socialise during the Olympics.

Chabad offers shabbat meals if you book online and locally, be sure to stop by during your stay.

The Centre of Jewish Life is a professional and social based hub of Jewish life bringing the local and international community together, with a great team of Rabbi’s and an action-packed itenerary during the Olympics. Stop by their cafe in the heart of the West End with FREE WIFI providing delicious freshly made sandwiches, pasta & salads along with fine pastries. Also look at their website for details of talks, lectures, shabbat dinners and lunches during the Olympics and throughout the year.

Synagogues will be running services during the games, please be aware that all synagogues and community centres will have extra security, so do not be offended if you have to answer a series of questions before being allowed in.

(We’ll be adding a list of local shuls shortly.)

Wishing you a warm welcome, and enjoy London 2012 Olympics!