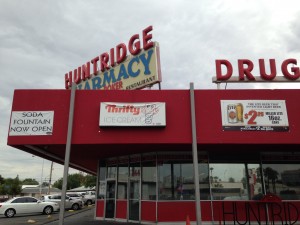 Before this year I had never been to Vegas. Back in February, I spent a long weekend there with my wife and compiled a list of all the Kosher restaurants in Las Vegas. Or at least I thought. Last month I was back in Vegas for a business trip and was notified about this little known place that’s been kosher for at least 2 years now.

Huntridge (Pharmacy) & Soda Fountain is a throw back to the 1960’s, and actually has existed since the early 60’s as a non-kosher restaurant / “Soda fountain” and a functioning pharmacy in back. 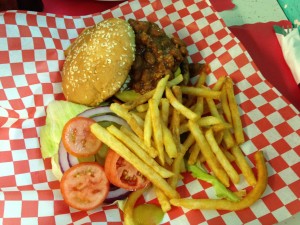 I paid a visit to Huntridge Soda Fountain on the business trip with my colleagues and it was definitely an experience. The first things I noticed were the nieghborhood. It’s 10 minutes north of the Strip by car, which is not near any of the other kosher restaurants in Vegas which are further west. The nieghborhood was also a little shady, something I was warned about. The restaurant itself is tough to find unless you know to look for Huntridge Pharmacy. After walking in, the first things I noticed were the items/tchotchkes for sale, some modern some seemingly from the 60s, and the fact that the place had a baked in cigarette smell. In a way, it added to the ambiance knowing that this place was a relic. 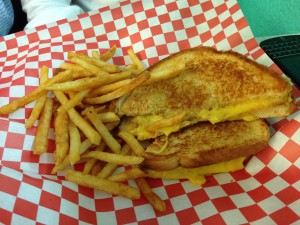 The menu was that typical of an American diner: Grilled Cheese, Chili Cheese Fries, Milk Shakes, Veggie Burgers, Tuna Wraps, salads, and other related items. Some of the original items from the 1960s are still in use, including the ice cream freezer.

I had the Chili Cheese Veggie Burger + fries, my colleagues got the grilled cheese.

The food is all made on a griddle, typically using prepackaged ingredients, truly a throwback to the era when this shoppe opened. The food was ok, but it was definitely an experience. The service isn’t particularly quick or accurate, but they were friendly, and it was 100º outside (typical of a summer day in Vegas) so we just enjoyed the Cherry Coke (Coca Coca with Cherry syrup & cherries added) and ice in our booth.

It’s worth a visit just for the experience. 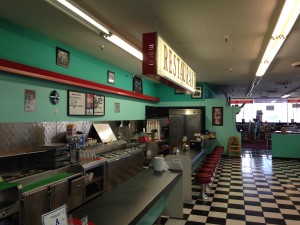 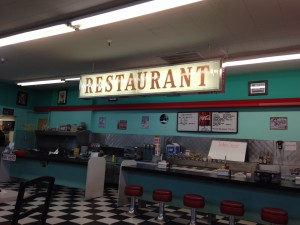