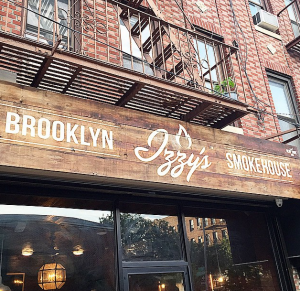 The much anticipated kosher BBQ smokehouse in Crown Heights, Brooklyn has been in the works for well over a year and is slated to launch in early July (check back here for the official date).

Currently, Izzy’s Smokehouse is under a soft-opening stage, testing out their food and concepts to invited guests only so they can tweak their operation before being open for the general public.

I had the privilege of being invited to the soft opening to try out their food and give them some feedback. I was able to taste many of the items on the menu including:

While I would normally never review a restaurant during a trial period, the food was so good that it was worth calling out. When it comes to the meat, it is on par with some of the best (if not the best) BBQ I’ve ever had. I’ve judged the Long Island Kosher BBQ Championships for 3 years, and the only BBQ I’ve had that is about par to this meat is Ari White’s Wandering Que (fka Hakadosh Barbecue). The brisket & pastrami were delicious and had the right texture. Wings were amazing and a totally different flavor than your typical hot wings. The brisket & beans were good & flavorful. But it was perhaps the Ribs that stole the show. The flavors and the texture were unreal.

it is worth noting that the restaurant’s seating capacity is smaller than most and they don’t take reservations, so plan accordingly.

Here are a few pics from that meal:

Smoked hot wings @ the soft opening of @IzzysBBQ in #CrownHeights #Brooklyn — not open to the public yet. #kosher