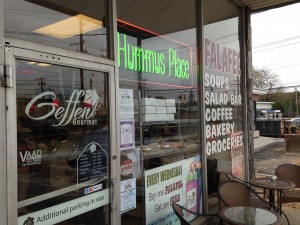 Geffen Gourmet is a local 5 Towns Israeli grocer (or makolet if you prefer) that has recently added seating to it’s shop, serving typical “hummuseria” fare: Hummus plates, falafel, pitas, and the accompanying salads and sides that go with it.

While the Hewlett, Long Island location just started offering this Hummus Bar menu within the last few weeks, in our conversation with the owner, she intimated that the menu will be changed slightly in the coming weeks as they are testing out items.

Geffen is across the street from Israeli/Middle Eastern restaurant, Ahuva’s Grill, which is a very popular meat restaurant with some similar offerings. Geffen Gourmet, however, is entirely pareve (both the market and the Hummus Bar) and significantly cheaper. 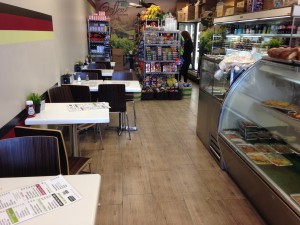 The store is under the kosher supervision of the Vaad of the 5 Towns.