After recently getting back from Israel, I can tell you that there are multiple things you need to plan in advance before your trip. Finding your lodging, meals, and scheduling your activities are obviously all things you should think about doing way in advance of your travel to Israel. Renting a car is often one of those things left for last. While I don’t think it should be the first thing you book, don’t leave it for last second either, especially if you’re traveling during high-season, which in Israel can be associated with the major Jewish holidays, all of summer, and most of winter (as Americans and Europeans flee to Israel to escape the snow – only to get rain). 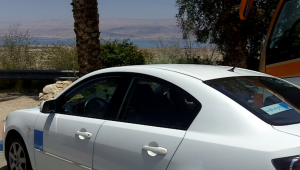 About 8-10 weeks before my trip in May I began researching rates and specials for car rental companies in Israel.

There was a few things I noticed about this process:

In Israel, unless you’re camping out in either Tel Aviv or Jerusalem, renting a car can really come in handy. Personally, I love driving on Israel’s highways, many of which are new and didn’t exist last time I was in Israel a few years ago. If you’re looking to criss-cross the country (and you’re not alone) renting a car will definitely give you a greater flexibility of getting where you need to go, without relying on taxis, Egged buses, or Israel’s national train system (which I love, but honestly, it needs major improvements). In fact, if you’re able to, avoid taking taxis altogether. If the taxi driver gets a whiff that you’re a foreigner on vacation (or even an Oleh to Israel whose Hebrew accent is poor) you will get price gauged. I experienced it multiple times in Tel Aviv alone.

My personal favorite drive is from Jerusalem to the Dead Sea down Road 1:

After I had booked my rental with Eldan, they found out about YeahThatsKosher.com and was excited to be sponsoring our content. Overall we had a great experience with Eldan and they offered us the best price.