Kosher Info: You will not have a hard time finding kosher food in Rechovot, as the city is populated with kosher restaurants and quick off the street grub (think shwarma & falafel).

The majority of the eateries are located in 3 areas, which, depending on your purpose of visiting Rechovot, will come in handy.

1) On Rechov Herzl. The main drag that cuts through the city from one end to another is filled with cafés and open shwarma / falafel places, which are often quite good.

2) In the Rechovot Mall (called the Kanyon "קניון" in Hebrew). On the mall's lower level there's a food court alongside the movie theater. All of the food court's eateries have a kosher teudah (certificate), albeit from varying kosher agencies, except for the McDonalds.

3) In the Tamar Science Park on the border with Nes Tziona. One of the newer areas of the city directly north of the Rehovot train station, the modern office park has numerous kosher establishments, on the nicer / pricier side, catering to the local business clients.

There are kosher restaurants outside of these 3 areas, but none that I have tried (or that my family in Rechovot recommend.

The following restaurant descriptions are courtesy of my cousin Shoshanit who is a Rechovot native.

In the Rechovot mall food court, I have had the opportunity of trying many of the kosher eateries over the years visiting this town. 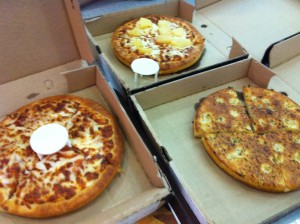 Tourist Info: Rechovot is not known as a tourist destination, however, many more visitors are coming to the city for business purposes, typically to the Tamar Science Park on the north end of the city past the train station, where many hi-tech and bio-tech companies have moved in over the past few years (including HP and Africa Israel), which could be partially due to its close proximity to the Weizzman Institute (Machon Weizzman) adjacent to the Rechovot train station.

The Weizzman Institute itself is an interesting place to visit, as the campus is beautiful and they have an outdoor science park on the premises. The entrance to the campus is on Herzl St. (Rechov Herzl) on the northern end of the city, walking distance to the train station.

Rechovot is historically known for its orange groves, hence the oranges on the city's crest (see top image), but today, oranges are tough to find in the now large Israeli town of approx 115,000 people.

A historical site worth visiting is Machon Ayalon, an underground ammunition factory used before and during Israel's War of Independence. The interesting part was that it was done entirely in secret, with a 10 ton oven and large washing machine covering the entrance to the underground facility and masking the sound the bullet machines made. Definitely worth a visit. Call 08-9406552 for info and to make a reservation (which is required to visit). They also close early, 4pm everyday and 2pm on Fridays.

Rechovot is about 20-30 minutes south east of Tel Aviv (depending on the traffic).

Jewish Info:
The only non-Jews in Rechovot are likely the Vietnamese and other Asians living working in the region, as well as a minority of Russians who migrated to Israel (but are really not Jewish).

The Orthodox population in the town is sizeable, with multiple dati leumi shuls, a large charedi "Kreitschniver" community, and an Anglo shul called "The Berman Shul" on the campus of Yeshivat HaDarom. Most American, English, Canadian, South African, and Australian immigrants to Rechovot are affiliated with that community.