Kosher Info: There are no kosher restaurants here but with a gigantic Indian ex-pat population, there is an abundance of vegetarian restaurants. Countless Indian restaurants! What could be better?

Standard Middle Eastern fare is found here, so I highly recommend is the halwa. It is gelatinous (jellylike) and is supposed to scooped out of the container by hand. It comes with cardamon and other spices and is absolutely amazing. It’s nothing like the crumbly halva North Americans (and Israelis) are accustomed to.

Whilst NOT Kosher… McDonald’s has both veggie burgers and “veggie surprise”, plus a filet-o-fish. interestingly there is also the “McArabia”, which is either chicken or beef, served in a pita… clearly not kosher, but there’s your culture factoid for the day.

Tourist Info: Muscat is a port city in a country with an extremely popular sultan. It’s quite progressive compared to other Gulf countries and the sultan has already decided that after he passes away that the country will become a democracy.

It is really hard to get around Muscat without a car and a local to navigate. The city is extremely spread out and is not walkable.

Here is a quick list of things to do and attractions in and around Muscat:

Dress info: Despite the stated progressiveness, it is still a Muslim country the laws concerning clothes must be observed. Cover shoulders and knees, wear shirts with high necklines, and when going to religious areas, women must cover their hair. 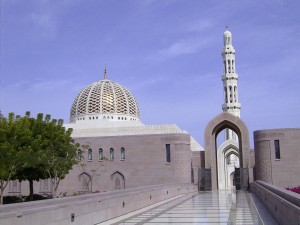 Muslims wear traditional dress on the whole but the Indian ex-pat community is much more prone to wearing jeans and t-shirts. In areas like the souk, such clothing is permissible but on the beach, make sure to cover up appropriately.

Visit: http://www.destinationoman.com/socialcustoms.html for more tips on the Omani dress code and etiquette.

Jewish Info: The country itself is located northeast of Yemen and near Iran, two countries that until recently that had Jewish huge populations.  It’s about three hours southeast of Israel. Today there is no Jewish community in Oman, but at one point Jews had a presence in the country, mostly made of up Yemenite and Iraqi Jews.

The grave of the prophet Job is said to be 45 miles from Salalah, located in the south, and very close to the border with Yemen. Benjamin of Tudela, a famous cataloger of Jewish communities around the world, visited Muscat around 1170.

Oman does not have any formal relations with Israel, but from 1996 to 2000 the two countries did have exchange offices. There is no issue with Israeli stamps (in your passport) or visas and not much anti-semitism, if at all. Wikipedia, however, says that Omani newspapers circulate a high amount of anti-semitic images. In response to the Iranian threat, which is just across the gulf, the Omani government has started to reach out to Israel and the Jewish community.