My wife Chani and I went to Jamaica as a pre-baby vacation when she was 6 months pregnant. There is very little kosher food in Jamaica, but you can have a great kosher vacation there with a little work.

There is a Chabad in Montego Bay, and they can deliver kosher meals to hotels with advanced notice. We didn’t try the food because the Rabbi was out of town the week we went, but we called him beforehand to get some information about what kosher items were available in supermarkets and he was very helpful. 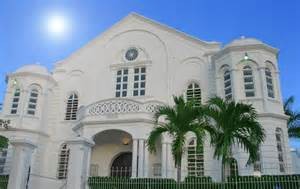 It is unclear whether Jamaican milk is kosher. Many extend the standard “cholov stam” heter to any country with strict food production laws (aka, Belgium yes, China no), but I could find no information on whether Jamaica meets that standard, and the Rabbi couldn’t really help since Chabad doesn’t rely on that even in the US. We brought shelf-stable milk with us. Other dairy items such as yogurt are available in stores since they are shipped from the US and have hechsherim. Don’t expect to find cheese.

Bringing your own kosher food to Jamaica is tricky. Jamaica has very strict laws forbidding international imports of most food items without a permit from the Department of Veterinary Services (yes, really) of the Ministry of Agriculture . They don’t check every bag, but if they check yours and find food they will at the very least take it away. However, bringing in kosher food is an officially recognized valid reason to get a permit.

Some people told us to risk it and some warned that we definitely needed a permit, and in the end we got one. It’s a complicated process. (Note that they are serious about specifically requiring Internet Explorer). It takes a number of days, and my first 3 submissions were denied for silly reasons (some of the fields on the form are very confusing, and some have bizarre unstated rules). In the end I called the ministry directly and a patient and helpful woman in their office helped me fill out the form and get it approved. I probably spent 4-5 hours on the permit process (and in the end they did not check our bags!) but it gave me peace of mind that we’d have our stuff. Note that even with the permit they are not going to let you import raw meat or poultry – only cooked stuff and dairy products. We brought schnitzel, milk, cheese, a box of frozen pizza, pita bread, and a few ingredients and spices.

Many people who come to Montego Bay stay in one of the resorts. We didn’t do that – we rented a local villa. At several hundred dollars a night, this is a pricy option compared to a hotel room, but since most villas have multiple bedrooms the price drops quickly relative to a hotel if you need more than one room. Many of the villas have rights at one of the local resorts, although we didn’t make use of that. Pretty much every villa comes with a private pool, and some of them are secluded enough to be very private (e.g. for tzniut swimming). Almost all of the villas come with some sort of staff as well – some combination of housekeeper, cook, butler, gardener, driver, etc., depending on how big (and how expensive) the property is.

There are a few companies that operate large amounts of villas; we went with Jamaican Treasures and they were amazing to work with. We had a very specific list of things we wanted, and Lisa Hendrickson-Clarke (motto “Yes, I have inspected each and every villa personally in Jamaica!”) helped me find one that perfectly matched our needs. We rented the Pleasant View villa, and Lisa helped us negotiate a lower rate than what was published (it was off-season and last minute, which probably helped).

Our villa had a housekeeper named Andrea and a cook named Carol. Before you arrive, you correspond with the staff via email about what foods they should buy from the grocery, and they have everything ready when you arrive. In advance, I got a long list of famous Jamaican dishes and whittled it down to only those that could be potentially made with kosher ingredients. I then worked with Carol to figure out which ingredients were available locally, and brought the rest with us. We settled on this list (bear in mind that we only went for three nights!)

She also bought us cereal and pancake mix, in case we got hungry for home. Which we did not.
Most of the ingredients were available locally. Many things (rice, flour, sugar, salt, beans) don’t need a hechsher, and some of the other things (oil, some spices) were available with US hechsherim which Carol checked for us in advance. Scotch bonnet peppers, which are a key ingredient in many of these dishes, are available fresh (even though apparently people usually use canned ones – which don’t have a hechsher). Red snapper is a kosher fish, and available fresh (as in, fished the same day!) and it’s easy to check for kashrut by running your thumbnail over it and making sure that you can easily detach translucent scales.
Of course, you can also eat the local fruit. Fresh Jamaican mango is one of the most delicious things I have ever eaten – it tastes nothing like what we get in NY. Fresh sugar cane is also amazing (we took a bag with us when we left and I rationed it for weeks). We also drank lots of fresh orange juice and amazing pina colada made of fresh pineapple blended with fresh coconut. Red Stripe beer is kosher, as are the amazing rums. (Star-K says all unflavored rum is kosher; CRC says only light rums plus some specific dark rums; ask your own Rabbi.) 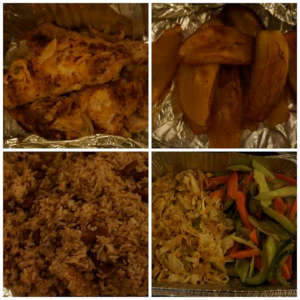 Aside from ingredients, we needed kosher utensils. These, we brought with us. We took two pans (one for dairy, one for pareve), a cutting board, some knives, spatulas and sponges, as well as plenty of plastic utensils and some disposable tins. We only used the stove top, not the oven, and we followed the position of Rav Moshe Feinstein that they only need to be cleaned, not kashered. We also used glass cups for cold drinks, and non-kosher plates for cold fruits, as well as the blender for cold fruits with no sharp ingredients; you can ask your own Rabbi about all of these things. Carol understood our limitations and worked wonders with the very limited set of tools we had brought.

Finally, we had to act as our own mashgichim for everything that was being prepared, including turning on the burners, checking the ingredients and the fish, and acting as a yotze v’nichnas (pretty much constantly) by hanging around the kitchen to keep an eye on everything being cooked. Carol and Andrea were both friendly and understanding, and this all worked out great, but definitely make sure that this is something you are comfortable taking on, and have the number of someone to call if a question comes up (as it did for us at least once).

Food aside, Jamaica is an incredible country to visit. We had only two days aside from Shabbat, so we packed in as much as we could. On the first day, we hired a driver to take us directly from the airport for a full day of activities. We stopped off at the villa to drop off our stuff and change, and then we drove (about an hour and 45 minutes) to Dunn’s River Falls. This is an amazing water hike where you climb a series of short waterfalls inside the water, starting from the beach and ending up 1000 meters higher at the top, which is where your car is parked. It’s very commercial and crowded but still loads of fun. Chani managed this without a sweat, causing another hiker who was not 6 months pregnant to announce that she needed to reevaluate her own life. It takes an hour or two to do the full circuit from the parking lot to the beach and up to the cars again, including time to stand shivering under a waterfall for a photo. You need to go with a guided group, and tips are expected. At the top there is a craft market where you can buy things; bring cash (for this and to tip the guides) because once you exit to the parking lot you can’t reenter.
From Dunn’s River we drove about 30 minutes to the Blue Hole. This is a different set of waterfalls, far less commercialized than Dunn’s River and also clearly less… regulated. We signed waivers and then a teenage guide led us on a short hike to a 5 foot waterfall. We jumped over the waterfall into the pool below. That was the easy jump; they got progressively crazier. I did a bunch of things that in retrospect seem completely nuts, including a 30 foot cliff jump into the lagoon, and walking down the face of a waterfall (hard to explain) with the water rushing past my feet and two guides showing me where to step until I could jump. There were also underwater holes in the rocks to swim through and a rope swing over the lagoon; Chani managed that too. I’d recommend this place if you are a little crazy and if you can avoid thinking about what would happen if, half an hour of 4wd trails from the nearest small town, someone actually got hurt.
We drove home, got dinner, and then headed out again to Glistening Waters, one of 4 bioluminescent lagoons in the world. This is a boat trip that can only be done at night, and is worth going to Jamaica for all on its own. You jump out of the boat in the middle of the bay and swim for a while (it’s so shallow you can stand) while blue fireworks shoot across the surface from every movement you make. It looks like a Disney cartoon come to life.
Friday was our second day, and we spent it at one of Jamaica’s famous beaches; Doctor’s Cave. It was a beautiful beach but nothing worth driving out for compared to other Jamaican beaches; just go to the one nearest where you are staying. There was a bar on the beach with lots of kosher-certified mixes, and a local beach goer was catching seahorses and showing them off. Afterwards we had lunch at home and then headed back out to a craft market in town where we bought some souvenirs; read a guidebook about Jamaican haggling etiquette; it was all true.
Shabbat was pleasant (and delicious; Carol cooked everything for us on Friday). Motzei Shabbat we hired a driver again (you really don’t want to drive yourself in Jamaica) and drove to Negril to listen to reggae. Our driver was very friendly and filled us in on a lot of nuances of local culture that we hadn’t caught on to. He took us to Bourbon Beach, where there was an excellent concert going on (and apparently there is one every night). Negril has a sort of rough reputation for night time, but the worst thing that happened to us was stepping on a giant crab in the middle of the street, which is unpleasant for everyone although far more so for the crab.
Sunday morning Carol made us a delicious breakfast and packed bags of fruit for the plane. We were home in NY by early afternoon. We definitely want to go back!