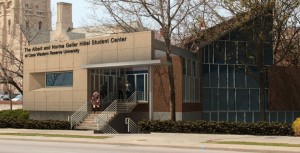 The Albert and Norma Geller Hillel Student Center, currently under construction adjacent to Hillel’s current facility in Cleveland, will house a “kosher restaurant open to the public, flexible activity space, and classroom space for the university that will make Hillel a more integral part of campus life,” according to the Cleveland Jewish News.

The new Cleveland Hillel building was originally slated to be completed by this past August. No word on an official opening date.