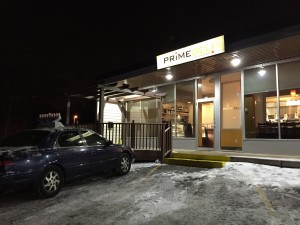 I had the pleasure of enjoying a meal at this restaurant on its second night open –which normally is a recipe to strike out – but they hit a home run.

Earlier this month I had the opportunity to () go on a 2 day business trip to Minneapolis, MN. Luckily for me, the city is not entirely devoid of kosher options with 2 kosher restaurants in town. Ironically, the 2nd kosher restaurant, Prime Deli, opened the day before i arrived, so naturally I had to pay a visit. The other restaurant opened a little under two years ago and is a dairy place called Vitali’s Bistro Cafe. (Prime Deli has no connection to the Prime Hospitality Group restaurants in NYC)

Normally I would not review a restaurant on its second day of operation allowing the restaurant to get the initial kinks out and give them the overall benefit of the doubt. However, after taking my 3 non-Jewish co-workers for dinner to Prime Deli on that second night of operation, I must give them their due.

The restaurant’s decor is modern minimalist and their multiple booths comfortably seat groups of 4+ people. The service was friendly and attentive, explaining to us the dishes on the menu. [Click here for the Appetizer Menu] [Click here for the Main Course menu]

Luckily for us, we decided to order and taste much of what the menu had to offer. The menu options are perfect – just enough to keep you coming back for more, and not too much to have you overwhelmed.

For our appetizers we tried all 4 of the First Bites options: the Skewered Wings, Spring Rolls, “3 Little Knishes”, and the Nosh Platter. The wings were long chicken wings grilled nicely and served with a Japanese Togarashi sauce which was delicious! The flavors of the sauce were entirely new to our palettes and made the dish. The 3 knishes (Potato Onion / Corned Beef & Kraut / BBQ Pulled Beef) were all delicious and well assembled. You never think of knishes as a high end dish, but these were executed perfectly.

The Spring Rolls were also really tasty and crisped to perfection. The Nosh Platter is a smattering of Mediterranean dips and falafel which I tasted and it was good, but I focused my attention to the other 3 apps. Overall, you can’t go wrong with any of these apps.

Of the other, non-main dishes at Prime Deli, our table ordered one of the salads and one soup, the Cumin Roasted Beet Salad which was tasty but very heavy on the cumin, and the Matzah Ball soup, which was definitely a tasty novelty for my non-Jewish colleagues. Otherwise, we focused on the main course.

Being a burger lover, I ordered the Prime Burger Deluxe which comes with crisp fried pastrami, a fried egg, onion marmalade, horseradish Russian dressing, lettuce & tomato. The burger was compiled really well, even if I couldn’t taste the horseradish, the bun, meat, egg, etc. were all cooked appropriately and left me wanting more.

My colleagues tried two very interesting entreés, both were very unique and delicious – I would go back and order either again. The Mocha Flat Iron is a coffee cocoa dusted steak with onion marmalade, and chimichurri, served with “Bubbie’s mashed potatoes”. We were concerned about all the flavors with the meat here, but served medium rare, the meat was juicy, tender, and flavorful, and not to mention beautiful on your plate.

The other interesting entreé was the Prime Saltimboca: pastrami wrapped chicken breast, pan roasted in a lemon sage jus with capers, also served with the mashed potatoes. On it’s own, the meat was tender and received some smokiness from the pastrami, but when dipped into the lemon sage jus, it’s just a delicious flavor explosion on your palette. Do not eat this dish without the jus. It takes the meat to a whole new level.

By the end of this feast, the 4 of us were stuffed and insanely surprised by the inventive and flavorful dishes we had at this brand new, 2nd night, middle of nowhere (for us New Yorkers at least), kosher restaurant.

If you’re visiting Minneapolis, or even if you’re just flying through MSP, I highly recommend making a stop over to Prime Deli. Really blown away by what we had. I’m hoping they’ll be around for a long time.