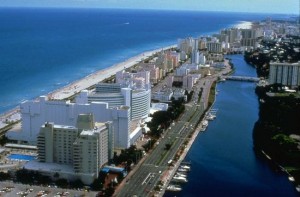 Contributed by: Dani Klein | Last Date of Travel: December 2011 (Special Thanks to @DaniOpp)

Kosher Info: One of the many reasons there are so many frum travelers to Miami Beach is the fact that there's a lot of kosher food available. In fact, we're it not for the huge influx of steady New Yorkers (and other northerners) down to the Miami Beach area, the local community could not support the vast amount of Kosher options they currently have, which is disproportionally large compared to the native Kosher observant population.

Having said that, there are actually some really great kosher options for locals and visitors alike.

There are a few areas where kosher restaurants can be found. And chances are, when you find one, others are likely not far away.

Scroll down below for an interactive map of the restaurants

The Aventura area boasts several nice dinning choices in the beautiful shopping center known as “The Waterways”. China Bistro, an asian fusion restaurant, has a great menu with steaks, lo mein dishes, and delicious sushi.  Just down the walk is Weber Café, a nice French inspired café with pasta dishes, Paninis, and pastries.  With outdoor seating, patrons can enjoy the beautiful ambiance, breeze off the water and array of fountains.  On the other side of the fountains, Gigi’s, a Mediterranean/Italian inspired restaurant serves breakfast, salads, fish, pasta, sandwiches, falafel, and fresh fruit smoothies.  The collection of restaurants and open air shopping makes The Waterways a nice midday or evening destination.

Just south of The Waterways, off of Biscayne Blvd., FresKo, a dairy gourmet restaurant serves pastries, sandwiches, wraps, and gourmet pizza. FresKo is just south the of the Aventura Mall and just north of Loehmann’s Plaza, making it a convenient stop for that mid-afternoon lunch fix. In Loehmann's Plaza, there's Pita Plus of Aventura which is a solid Israeli shwarma/falafel joint.

Over to the west side of Biscayne Blvd. lie Jonas Pizza and Jonas Grill.  The side by side restaurants (dairy and meat, respectively) offer delicious food and daily specials.  The portions are large and satisfying.  Sandwiches at Jonas Pizza are so large you will need two sittings just to finish one.  Jonas Grill offers shwarma, and other Israeli grill items that are common place in your standard Israeli grill places.  However, Jonas Grill also has a full sushi menu, making it a great choice even if you aren’t in the mood for grilled chicken skewers.

At the Stirling Road Kosher Shopping Plaza at 56th street, there are several choices for the kosher consumer.  There is the Achla Bon Ami dairy restaurant, which is open 24 hours, serving pasta, sandwiches, fish, sushi, and more.  Next door is the Achla Pita Grill (formerly known as Sunrise Pita Too) which has the best falafel and shwarma in town.  If you go, make sure to try the lamb shwarma laffa, you can thank me later.  On the other side of Achla Bon Ami, is Jonas Pizza.  The Hollywood location (formerly JP Bistro/Sir Taco) has the same menu as the Miami Beach and Aventura/NMB locations but not the same specials.  The sit down service and presentation is quite nice but I found the waiter service to be slow.

Across the street from the Stirling Plaza is Avigdor’s Mozart Café.  This dairy restaurant resides in a reconstructed home on the north side of the street.  They serve gourmet pizza, pasta, sandwiches, salads, and other delicious dairy fare.

Closer to I-95 is the only remaining Sara’s Pizza franchise.  The menu has all the familiar favorites for those who grew up on Shmoppers and Pizza Lizzas.  The ambiance leaves much to be desired and the food items are not as tasty as they were at the original Sara’s Pizza location (but that could just be the nostalgia talking).

Save $45 on Rentals in South Florida with Florida Kosher Villas
Closing: 41 on the Bay (Inside Tower 41), Miami Beach
Comment