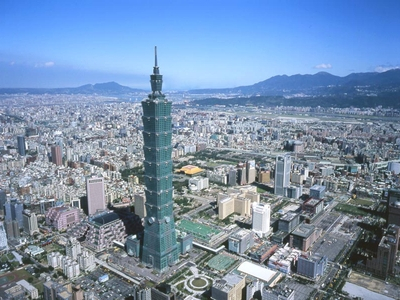 When I visited Taipei for several weeks, I had an apartment with a kitchen which made things much easier. Finding kosher food in Taipei is a bit difficult but very possible.

Starbucks, 7-Eleven, and Haagen-Dazs are all very popular chains in Taipei (and other large East Asian cities), where it is usually possible to buy kosher snacks with a hechsher (coffee, ice cream, chips). Most supermarkets will carry a small number of Western goods, only some of which are made in the U.S. (and therefore carry a hechsher).

The easiest place to buy kosher groceries is at a supermarket chain called Jasons. There are a number of them in the greater Taipei metro area, most notably in Taipei 101, which was briefly the tallest building in the world. Jasons is probably most similar to Whole Foods in the U.S. and it carries a very wide selection of international goods including many familiar kosher brands from the U.S. (like Lenders Bagels, cereal, etc).

Additionally, strict vegan Buddhist restaurants are also extremely common and can be distinguished by a swastika on display. Swastikas here do not refer to Nazis at all.

Tourist Info:
Taipei is only a short one-hour flight from Hong Kong; there are also direct flights from the United States and from many other cities in East Asia.

The historically inclined should not miss the 2-28 Museum and the Chiang Kai-Shek Memorial. The areas surrounding Taipei are filled with hiking including the Yangmingshan National Park, which has small mountains to climb and great hot springs. Other sites of interest in the city include Taipei 101, the Shilin Night Market, and many interesting neighborhoods to explore.

The city is relatively easy to navigate. A modern subway/light rail system covers the city and suburbs. Subways and buses have English announcements and signs.

Services are traditional but there is very rarely a minyan for Shabbat. The crowd usually consists of tourists and people in Taipei on business, several Taiwanese people (often staff at the Israeli trade office), as well as a few local Jews.

After each service, Rabbi Einhorn serves wine, challah and delicious local honey. His website indicates that you can order double-wrapped fish, smoked salmon, salad, and challah from the Sheraton Hotel, though I did not try this.