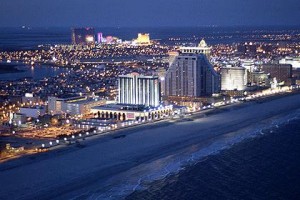 Kosher Info:
The Kosher options in the AC area aren’t many, or particularly exciting, but enough to accommodate the kosher traveler (or kosher gambler) down in south Jersey.

There are 3 kosher restaurants in the Atlantic City vicinity:

Other Kosher stuff found in AC: 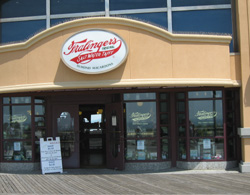 Travel Info:
Atlantic City is well known for it’s casinos and gambling outside of the West Coast California online poker scene, and has recently been trying to rebuff other tourist aspects to the city. While the city was quite depressed in the Winter time with few tourists milling around outside or on the boardwalk, the city has a robust outlet shopping area (yes – that is discount brand name stores – calm down!) called “The Walk”, which had some great deals.

Each of the casinos has it’s own flavor and theme, so you’ll have your pick. The Tropicana has a huge complex inside where we found many of the tourists holed up during the cold weather days and nights.

The Absecon Lighthouse was a nice historic touristy place to visit, although entirely unrelated to the AC gambling nature of the town.

I recommend bringing your own car to AC, or staying in your hotel/casino. There is however a jitney / shuttle which stops at nearly every casino and takes you to the shopping area as well as the transportation hubs.

The express ACES train is a new way to get to AC from NYC with only 2 stops in under 3 hours (although it is currently not running until May 13th). It departs Penn Station NY, stops in Penn Station Newark, and Atlantic City only. Fares are reasonable starting at $29 o/w.

Jewish Info:
If you’re staying in AC over Shabbat, you may want to stay closer to Ventnor City where the Chabad is located. It’s over an hour walk from most hotels in the Atlantic City area.
Chabad of Atlantic City: www.chabadac.com
6412 Ventor Ave. Ventnor City, NJ