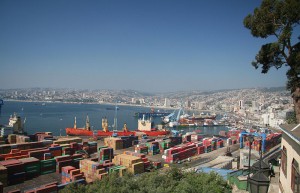 Finding kosher food in Valparaíso can be hard. Besides the packed OU food in big supermarkets (Lider and Jumbo can have some products under orthodox supervision), it’s almost impossible to get anything else. We recommend you to bring your food from Santiago and check the open list of kashrut here.

Valparaíso is the third largest city in Chile. One of the most important seaports, cultural capital, and legislative capital in the country.

The city had a special role in 19th century, when the port served as a stopover for the ships traveling between the Atlantic and Pacific Oceans crossing though the Strait of Magellan. Later on, it received a lot of European immigrants mainly from Croatia, Italy, Yugoslavia, Spain and the United Kingdom, making it known as the “Little San Francisco” and “The Jewel of the Pacific.”

Valparaíso was declared World Heritage Site in 2003 by the UNESCO based on its urban design and architecture. Landmarks include: Sotomayor Square, 16 remaining “funiculars” (called ascensores), The Concepción & Alegre Historical District and The Bellavista Hill, which has the “Museo a cielo abierto” or “open sky museum.”

Valparaíso organizes a major festival attended by hundreds of thousands of participants on the last three days of every year. The festival ends with a “New Year’s by the Sea” fireworks show, the biggest in all of Latin America, attended by a million tourists.

The Chilean Congress meet in a modern building, after relocation from Santiago during the dictatorship of Pinochet.

Nightlife activities in Valparaíso are claimed to be among the best in the country. Sailors and students alike favour the harbour sector due to the various traditional bars and nightclubs, among them “Bar La Playa”, “La Piedra Feliz”, El Huevo and “El Bar Inglés”, which can be found near Plaza Sotomayor.

Daniel Segal is among the few (maybe the only one) organizing kosher tours in Chile. For further information,feel free to write to segaldaniel[at]gmail[dot]com. 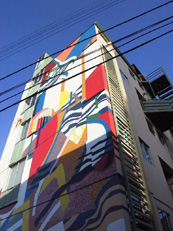 In what was the old Jewish district of El Almendral, there are still some houses with Jewish symbols on the inside and outside. The street where a synagogue and Hebrew School was founded it was demolished to build the National Congress, but both institutions have survived and moved to Viña del Mar.

In the only hill-of over forty who has Valparaiso, which was considered in the declaration of assets, there are several attractions of Jewish interest. The only synagogue in Valparaíso is Sephardic Israeli Society and Welfare Instruction Max Nordau of Valparaíso, which locals translate shorter and without animosity as Maldonáo.

The closest conservative shull and private school are in Viña del Mar, which offers Kabalat Shabbat and shajarit service. For safety reasons, please call in advance: 32-2681777.

✈ Cozumel, Mexico
Insane! Unlimited Flights for a Month on JetBlue: “AYCJ” – all over the U.S. & Carribean
Comment