“Seattle seduces,” our friend Patricia said no more than three hours after we had landed at Sea/Tac Airport and had driven through the city on our way to a coffee shop in Queen Anne Hill. From this high vantage point, Seattle spread out in organized chaos, contained only by the shores of Elliot Bay and Lake Washington to the east and west respectively. The Space Needle pierced the sky, an unmoving sentinel guarding the northern end of the city, while to the south, snow-capped Mt. Rainier played peek-a-boo with its ward 70 miles away. “I could certainly get used to this,” was what I said, taking in this view, that prompted Patricia to speak her prophetic words.

Twice last year my wife and I made trip from Miami to Seattle, about the longest distance one could travel yet still remain within the contiguous 48 states of the country. We went first in early summer to celebrate our friends’ wedding and explore greater Seattle. For our second trip, in late autumn, having decided we would like to move to the city, we wanted to see Seattle as prospective residents, get as much of an idea of what it would be like to live there, including, of course, exploring all facets of Jewish life in the area. What we found was a remarkable city with an abundance of personality, a multitude of activities for all kinds of visitors, and a very appealing destination for the kosher traveler.

Kosher Info: The first thing that strikes you about greater Seattle is the amount of kosher food options available. Living in Miami I know I am spoiled rotten for choice when it comes to kosher restaurants (in numbers if not in types of cuisine), but Seattle doesn’t disappoint. The Va’ad HaRabanim of Greater Seattle keeps an up-to-date list of approved restaurants and grocery stores, and it is always a good idea to check it immediately upon arrival to verify for any changes in status.

Seattle is a foodie town, and that love of a well-prepared, flavorful meal carries even into the kosher restaurants. The food choices are varied, though, ranging from bagels and sandwiches (Noah’s Bagels in University District), to pizza and pastas (Island Crust on Mercer Island), to authentic vegetarian Chinese (Bamboo Garden in Queen Anne Hill) and Indian (Pabla Cuisine in Issaquah and Renton). Meat choices are available at deli counters in Va’ad-supervised supermakets. And the prices are astoundingly affordable.

The dining options are scattered all over the greater Seattle area, giving the visitor a few choices within driving distance regardless of where their activities taken them. Exploring Downtown Seattle? Drop by Bamboo Garden at the foot of Queen Anne Hill, just a short walk away from the Space Needle. Checking out Eastside Seattle? Take a short drive to Pabla Veggie Cuisine in Issaquah. Heading out to the Olympic Peninsula? Stock up at Mercer Island’s Albertson’s or U. District’s QFC supermarkets.

If you are adventurous and want to prepare your own meals, aside from the fresh and seasonal bounty of the Puget Sound region available at a number of Farmers Markets (open daily throughout the city) or the famous Pike Place Market in Downtown Seattle, there are several supermarkets with extensive kosher sections to supply you with ingredients, as well as various locations supervised by the Va’ad HaRabanim where you can pick up kosher-cut fresh fish. Lastly, there are a handful of kosher caterers available as well.

Tourist Info: Seattle itself has a myriad of attractions to keep visitors happy; include the greater Seattle and Puget Sound region and you have a nigh endless menu of diversions for all activity levels. Hotels abound in the city and you can find a variety of rates and amenities suitable for all types of travelers. The Sixth Avenue Inn has been our home in the city on both trips because they are affordable, welcoming and have a great central location in the Denny Triangle area, less than a 10-minute walk to the waterfront. Free bus transportation within the Downtown Ride Free Area means you can zip around at your leisure and see more of the city. 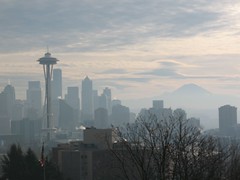 In the Downtown area you can find the famous and historic Pike Place Market on 1st Ave. between Pike and Pine Streets, the perfect place to sample a variety of what Seattle has to offer, from flowers to artisan crafts, fresh produce to fish (including flying ones at Pike Place Fish Market) and seafood, vintage souvenirs to ridiculous nick-knacks. Be sure to check out the original Starbucks coffee shop right on Pike Pl. then walk down one of the various stairs to the waterfront and watch the ferries come and go across Elliot Bay while strolling the wooden promenade.

Just down from the Pike Place Market on 1st Ave. you can find the Seattle Art Museum, marked by the gigantic automated sculpture called “Hammering Man.” Shops of all sizes, from tiny boutiques to the flagship store of Seattle-native Nordstrom, abound in the adjoining streets. Keep heading south on 1st Ave. and you’ll run into Pioneer Square, Seattle’s first neighborhood, where you can see a totem pole (a replica) and take the highly recommended Underground Tour and learn about Seattle’s streets-beneath-the-streets. Before leaving, check out Yessler Way and know you probably know it by its other, more infamous name, Skid Row, in honor of the logs that were rolled down the hill all the way to the bay.

A few blocks slightly north of Pike Place Market you will find Seattle Center, created for the 1962 World’s Fair and home to the city’s icon, the Space Needle, the Experience Music Project/Science Fiction Museum, Key Arena and other cultural institutions. The EMP/SFC is well worth the combined price of admission if you are even moderately into music and/or sci-fi, though if you don’t care for either, you can still admire the building’s bizarre design by architect Frank Gehry. If you go on a clear day (hint: you know it’s a clear day if you can see Mt. Rainier–or “the mountain.” as the locals simply refer to it–in the distance), the trip to the top of the Space Needle might be worth it. If you can’t/don’t want to spend that money and have a car available, head over to Kerry Park up on Queen Anne Hill, day or night, for a postcard view of the city of Seattle, the Space Needle and Mt. Rainier.

Orbiting the city, you will find the various neighborhoods, each a microcosm with its own charm, quirks and history. Ballard features the Hiram M. Chittenden Locks connecting Lake Union to Puget Sound, and the Nordic Heritage Museum, celebrating the neighborhood’s original, and still thriving, Nordic residents. Quirky Fremont has a bohemian vibe and eclectic art on its streets, from a statue of Lenin to a 50s pulp-style rocket, among others. Youth-filled University District is home to the University of Washington and a multitude of hip little stores. The Eastside, on the other side of Lake Washington, includes the cities of Bellevue and Redmond, and is the Northwest’s Silicon Valley, home to software giant Microsoft. The rapidly-growing Issaquah is a few minutes further east, providing a great front door to exploring the Cascade Mountains. To the south you can find Boeing Field, home of the aerospace giant, and the Museum of Flight, as well as the neighboring city of Tacoma, just 30 minutes away on I-5.

Having a rental car in Seattle is not necessary given the comprehensive public transportation system in place, though if you wish to explore beyond the city, it does come in handy. Considering the high parking rates Downtown, picking up a rental car in the middle of the trip turned out to be the solution for us, allowing for extra mobility once we had already spent a few days Downtown and were ready to see more.

With little being more than 20 minutes away by car, Seattle is a perfect base of operations for planning daytrips or short mini-trips within your vacation. Suggestions in the general area include Mt. Rainier National Park to the south, and Olympic National Park in the Olympic Peninsula to the west, where we spent two days and one night at Lake Crescent Lodge and would return to in a heartbeat. 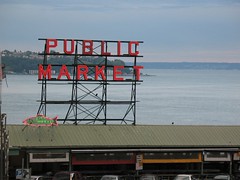 Jewish Info: The Jewish community in greater Seattle numbers a bit over 37,000, according to a 2000 demographic study. Jews have been a part of the Washington region’s history since the middle of the 19th century, even counting among their own a governor of the territory in 1870, and a mayor of Seattle in 1875. Most early Jewish settlers were of Eastern European descent, but by the start of the 20th century, Sephardic Jews from Turkey and Rhodes had begun to arrive, founding two synagogues and eventually becoming the third largest Sephardic community in the United States. Though originally concentrated in the city’s center, near Yessler Way, the Jewish community has long since scattered all over the greater Seattle region as it continues to grow.

The Va’ad HaRabanim keeps an extensive list of all of Seattle’s Jewish institutions, from congregations of all denominations, to community centers, newspapers, schools and cemeteries, and they also provide information to arrange for hospitality with the various communities for Shabbat and holidays.

To the south, Seward Park serves as the home to the significant Sephardic community, centered around congregations Sephardic Bikur Holim and Ezra Bessaroth, and the Ashkenazi Bikur Cholim-Machzikay Hadath. Seward Park has an eruv, though there are no hotels in the area.

Mercer Island, located in the middle of Lake Washington, also has a large Jewish population as well as an eruv. You can find Congregation Shevet Achim here, as well as an Albertson’s supermarket with a kosher Deli (including sushi), butcher, bakery and grocery section that would put many specialty kosher stores to shame. There are no hotels in this area either.

To the northeast of Downtown you will find the U. District and Ravenna, home to Chabad of UW and Congregation Shaarei Tefilah-Lubavitch. The Chabad House at UW offers only Shabbat shacharit services, serving as a day school the rest of the week, with most services held at Shaarei Tefilah. This community is on the verge of finalizing construction of an eruv that will cover a significant area and include other Conservative and Reform congregations as well.

In addition to these hubs, there is Chabad of Bellevue, on the Eastside, and the new West Seattle Torah Learning Center, as well as various congregations of Conservative, Reform and other denominations.

Seattle features three mikvaot at Congregation Bikur Cholim-Machzikay Hadath, Congregation Shaarei Tefilah-Lubavitch, and at Mikvah Mei Menachem in Bellevue, all available to women by appointment. Shaarei Tefilah-Lubavitch has a separate men’s mikvah accessible during the day, while the mikvah at Bikur Cholim can be used by men by prior appointment; Mei Menachem is for ladies only.

Seattle indeed seduces, and even the kosher traveler can fall prey to its allure. It offers an array of activities both cultural and physical, excellent dining and shopping options, and a vibrant and growing Jewish community that is happy to share their city with visitors.

Find out more about me here: http://highmoonmedia.com/tgt/about-2/

Kosher options for the Super Bowl in Tampa, FL
✈ Keeping Kosher in The Catskill Mountains, NY (“The Catskills”)
Comment