Kosher Info: Situated 90+ minutes (longer if you’re traveling during the weekend rush) north west of NYC, the Catskills have become the summer escape for Jewish urbanites for decades. Over the years kosher places have come and gone, while others still exist, feeding the thousands of Jews who flee the city each summer.

In this post, I will go over eateries, hotels, and markets (including within Bungalow Colonies) which exist in the Catskill region. Each location will be followed by its approximate location and town.

(Please note: Due to the nature of the Catskills, many of these restaurants or markets are not open all year round. Also, many of these institutions come and go. If you know about a recent closing, or a new store opening, please comment to this post and I will make the necessary changes. Thank you.) 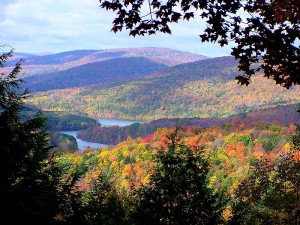 A few kosher hotels exist, but they are not for everyone. Places like Spring Mountain Resort (formerly the Homowack), Raleigh Hotel, and Kutcher’s are popular with families looking to leave the city, but unfortunately, these hotels seem like they have not been updated in decades.

On a recent stay at Kutcher’s by my family (celebrating a Sheva Brachot Shabbat), we observed the hotel and noticed it retains a musty, sometimes moldy smell. The hotel is large, and offers many amenities, but not everything is kept to appropriate standards. The food was quite awful. The place seemed like an old age home, partially due to the clientele, and partially due to the decor and lack of any updates since the 1970’s. The man-made lake out back is swarmed with mosquitoes. If you prefer hard mattresses, this is the place for you. From my previous experiences with other Catskill kosher hotels, like the Homowack, they don’t seem to differ much.

Tourist Info: The attraction for most is getting away from the city’s hustle and bustle. Sadly the few tourist attractions in this region remain the Monticello Raceway and Casino, a handful of golfing greens, and Wal-Mart. You heard me. Wal-Mart. The Monticello Wal-Mart is majorly packed Motzei Shabbat, it’s a massive social scene! The lines can be over an hour long, especially later Saturday night. You may be better off at the bowling alley with the teens.

Jewish Info: During the summer, this region is bustling with city Jews. Basically every bungalow colony has it’s own shul and set of minyanim, and typically it’s own mikveh. During off-season times, there are still Jewish communities (mainly Chassidish) who live there all year round, however, many of the kosher and other Jewish shops will be closed.

I just came across this site which has a listing of all the bungalow colonies. I can’t believe how many there actually are! Check it out: http://bungalowcolony.us/index.asp?lang=EN