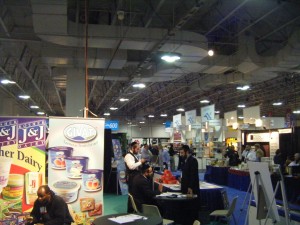 Kosherfest is similar to other conventions held at any other convention center. The only difference, kosher food. Wait, wait, FREE Kosher food. The sound of that makes any observant Jew grin with glee. I held the same feeling walking in to the exhibition hall, waiting to try all these new kosher goodies.

Walking into Kosherfest after stepping off the NJ Transit bus was fairly easy. Annoying, but easy. What was more annoying was the security not letting me into the convention hall because of my backpack. They were OK with messenger bags but not backpacks. They were afraid that people with backpacks will try and take as many samples as possible with them. If they only knew what was going to happen later that day. In the end, I got in.

Row after row of exhibitors, showing off their products services, and some new inventions. The thought of free kosher food didn’t really hit me until I already tried a few mini potato knishes, cheese blintzes, a chocolate slushee, mint Mentos, organic pomegranate juice, strawberry banana Prigat, and some re 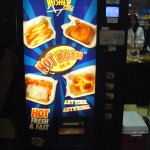 latively strong Muscat wine from Efrat. I was finally in a place where I didn’t need to hold back. Or so I thought.

I proceeded to try many different items, only dairy and pareve though as to not make myself fleishigs. “Hot Nosh” is a new vending option offering heated kosher food for decent prices. I found this product to be very important for those of us who travel, or who find ourselves in a location that typically lacks kosher options (campus, airports, stadiums, etc.). I got to try the mozzarella sticks.. they were hot and good. For $3+ it definitely hit the spot. It is also appealing for its convenience, always on even when the stores are closed. Definitely useful on college campuses, which typically lack kosher options anyway. I hope to connect with the businessmen behind “Hot Nosh” and help them expand this great idea. 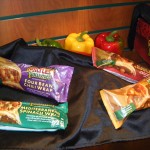 I also learned that Manichevitz created the brand “Guiltless Gourmet”, a favorite snack brand of both myself and my wife. Their chips, dips, and salsas are great. For the traveler, they offer frozen burritos, which are also really good. I definitely suggest taking a few of those frozen bad boys on your next road trip in a cooler. Just make sure you’ll have access to a microwave. (On a side note, my wife just noticed on the Spicy Black Bean Dip label it says: “Perfect as an addition to roasted chicken, pork, and burgers…”. What a great way to de-Jewify your brand. Kudos.) 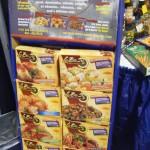 meal though), which can heat itself up without an oven or microwave. Arielle and I tried a couple of these meals on our trip to Iceland, and they came in handy as Iceland is totally void of kosher anything. These meals do not need refrigeration or any cooling of the sort. They are a bit pricey at about $10 a meal, but come very handy on the road or overseas. Just don’t try and heat it up on the plane!

A similar product to “La Briute” is China Mehadrin’s frozen meals. Obviously you’ll need access to a microwave and a way to keep these meals frozen while traveling, but they are still a great product for traveling.

One of the most important connections I made was with Weberman’s catering from South Florida. 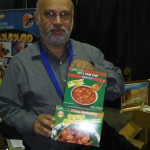 I know the company from my years spending Pesach in Miami… my mom would order catered food from Weberman’s, and the food was quite good. They create pre-made meals (much better than “airplane food”) for almost all cruise lines as well as Disney hotels and restaurants in both Orlando and Los Angeles. He gave me a few tips to share with everyone seeking kosher meals on cruises or at Disney locations.

I was also able to meet with and chat up the various representatives from the Kosher agencies such as the OK, COR & MK (Canada), CRC (Chicago), KLBD (UK), Kashrut Authority (Australia), etc. (the OU wasn’t too friendly). Many of them were excited to hear about this website and hopefully they’ll be helping with the project.

Toward the end of the day I started feeling really dizzy. Why? I don’t know. Eating too much crap? Maybe. But I’m better now. The last 30 minutes of KosherFest was utter mayhem, and wildly entertaining. Imagine a few hundred Jews and the barriers to free kosher products being removed. This was the scene near many of the stands giving away packaged food, especially Sabra Hummus and the other Israeli products nearby. I managed to pick up 3 new flavors of Sabra Hummus: Chipotle – Spicy, Caramelized Onion – YUM, and Pepadew??, as well as 2 tubs of the best hummus ever, Achla. I 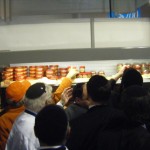 also walked away with a 9 pack of Gabila’s knishes, and a jar of Etrog Marmalade – weird!

Overall, this was a great experience and I look forward to KosherFest 2009!