Many people have been contacting me recently with kosher questions. I figured it was about time to find some good content on what it is to keep kosher, the laws, background, specifics, idiosyncrasies, debunk certain “Kosher” myths, and explain why we do what we do. 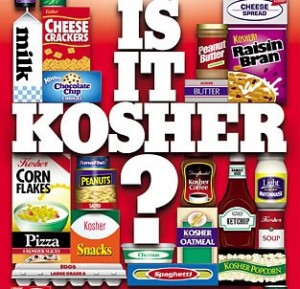 I must note that I am not a rabbi, or a halachic authority, which is why I will be extracting content from various sources on the web, and provide external links for additional research. (I am also going to divide this into multiple posts, so this one is not too long)

The following has been extracted from Judaism101:

Kashrut (Kosher in Hebrew) is the body of Jewish law dealing with what foods we can and cannot eat and how those foods must be prepared and eaten. “Kashrut” comes from the Hebrew root Kaf-Shin-Reish, meaning fit, proper or correct. It is the same root as the more commonly known word “kosher,” which describes food that meets these standards. The word “kosher” can also be used, and often is used, to describe ritual objects that are made in accordance with Jewish law and are fit for ritual use.

Contrary to popular misconception, rabbis or other religious officials do not “bless” food to make it kosher. There are blessings that observant Jews recite over food before eating it, but these blessings have nothing to do with making the food kosher. Food can be kosher without a rabbi or priest ever becoming involved with it: the vegetables from your garden are undoubtedly kosher (as long as they don’t have any bugs, which are not kosher!). However, in our modern world of processed foods, it is difficult to know what ingredients are in your food and how they were processed, so it is helpful to have a rabbi examine the food and its processing and assure kosher consumers that the food is kosher. This certification process is discussed below.

There is no such thing as “kosher-style” food. Kosher is not a style of cooking. Chinese food can be kosher if it is prepared in accordance with Jewish law, and there are many fine kosher Chinese restaurants in Philadelphia and New York. Traditional Ashkenazic Jewish foods like knishes, bagels, blintzes, and matzah ball soup can all be non-kosher if not prepared in accordance with Jewish law. When a restaurant calls itself “kosher-style,” it usually means that the restaurant serves these traditional Jewish foods, and it almost invariably means that the food is not actually kosher.

Food that is not kosher is commonly referred to as treif (lit. torn, from the commandment not to eat animals that have been torn by other animals).

Why Do Jews Observe the Laws of Kashrut?

Many modern Jews think that the laws of kashrut are simply primitive health regulations that have become obsolete with modern methods of food preparation. There is no question that some of the dietary laws have some beneficial health effects. For example, the laws regarding kosher slaughter are so sanitary that kosher butchers and slaughterhouses have been exempted from many USDA regulations.

However, health is not the only reason for Jewish dietary laws. Many of the laws of kashrut have no known connection with health. To the best of our modern scientific knowledge, there is no reason why camel or rabbit meat (both treif) is any less healthy than cow or goat meat. In addition, some of the health benefits to be derived from kashrut were not made obsolete by the refrigerator. For example, there is some evidence that eating meat and dairy together interferes with digestion, and no modern food preparation technique reproduces the health benefit of the kosher law of eating them separately.

In recent years, several secular sources that have seriously looked into this matter have acknowledged that health does not explain these prohibitions. Some have suggested that the prohibitions are instead derived from environmental considerations. For example, a camel (which is not kosher) is more useful as a beast of burden than as a source of food. In the Middle Eastern climate, the pig consumes a quantity of food that is disproportional to its value as a food source. But again, these are not reasons that come from Jewish tradition.

The short answer to why Jews observe these laws is: because the Torah says so. The Torah does not specify any reason for these laws, and for a Torah-observant, traditional Jew, there is no need for any other reason. Some have suggested that the laws of kashrut fall into the category of “chukkim,” laws for which there is no reason. We show our obedience to G-d by following these laws even though we do not know the reason. Others, however, have tried to ascertain G-d’s reason for imposing these laws.

In his book “To Be a Jew” (an excellent resource on traditional Judaism), Rabbi Hayim Halevy Donin suggests that the dietary laws are designed as a call to holiness. The ability to distinguish between right and wrong, good and evil, pure and defiled, the sacred and the profane, is very important in Judaism. Imposing rules on what you can and cannot eat ingrains that kind of self control, requiring us to learn to control even our most basic, primal instincts.

Donin also points out that the laws of kashrut elevate the simple act of eating into a religious ritual. The Jewish dinner table is often compared to the Temple altar in rabbinic literature. A Jew who observes the laws of kashrut cannot eat a meal without being reminded of the fact that he is a Jew.

How Difficult is it to Keep Kosher?

People who do not keep kosher often tell me how difficult it is. Actually, keeping kosher is not particularly difficult in and of itself; what makes it difficult to keep kosher is the fact that the rest of the world does not do so.

As we shall see below, the basic underlying rules are fairly simple. If you buy your meat at a kosher butcher and buy only kosher certified products at the market, the only thing you need to think about is the separation of meat and dairy.

Keeping kosher only becomes difficult when you try to eat in a non-kosher restaurant, or at the home of a person who does not keep kosher. In those situations, your lack of knowledge about your host’s ingredients and food preparation techniques make it very difficult to keep kosher. Some commentators have pointed out, however, that this may well have been part of what G-d had in mind: to make it more difficult for us to socialize with those who do not share our religion.

Although the details of kashrut are extensive, the laws all derive from a few fairly simple, straightforward rules:

How to Keep Kosher at an Airbnb or Home Rental