One of my favorite dishes in the world is a hamburger that is loaded with flavor and cooked to perfection. Thanks to the fast food industry, it has become almost impossible to find a legit burger cooked properly with the right spice combination and cooked from fresh ground beef. Well thanks to a good friend of mine, I might have found the right place. 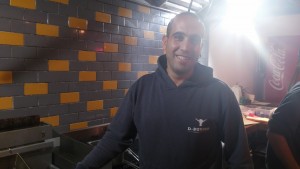 D-Burger, is a new hamburger restaurant that has opened a month ago, on the outskirts of the city of Givat Ze’ev. Givat Ze’ev is located 7 minutes north of Jerusalem. Located within the gas station (which is fairly typical in Israel), D-Burger has brought a new attitude to the city’s nightlife. Opening up any new business has it’s complications, this restaurant had a nightmare that every business owner in Israel dreads: terror.

Back in January, a bad situation that could have become worse at the restaurant was avoided thanks to the owner and head chef Daniel Ella. An 18 year old terrorist had come to the gas station to kill as many Jewish bystanders as possible. Once Daniel had noticed that the terrorist had stabbed a man, he got out from behind the stove and chased down the terrorist and had stopped him with the help of another business owner. Also making a kiddush Hashem by not allowing any of the other people surrounding the terrorist to lynch and further harm him, and letting the police take it from there. For the full story click here. 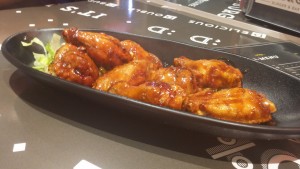 I went to try it out two weeks later and boy did I not expect the result of what I’d seen. The place was packed! They were sending out a lot of take-out orders but there were a lot of people ordering in house as well. The reason for this is because the food is righteous, the prices are very reasonable, and the decor is modern and comfy.

The chef started us off with Moroccan cigars with a tehini dipping sauce that was crunchy, not too spicy, delicious, and made from scratch. Then he brought out a big plate of hot wings. Not your ordinary deep fried, tossed in sauce hot run of the mill hot wings. He first marinates them overnight, then he shocks them in the deep fryer, then he tosses it into a frying pan to finish the cooking process and coat it with his homemade hot sauce. The chicken wings had a beautiful flavor with deepness to the marinade, the skin was crispy and the hot sauce was a beautiful compliment to finish of the perfect bite. 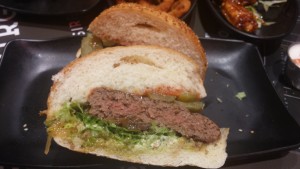 Then the chef served me two sandwiches, the house burger and the rib eye sandwich. What is great about their hamburger is that they grind the meat fresh every day, none of the beef is frozen. The hamburger was cooked to a perfect medium as the steak sandwich was the same. The hamburgers come in different sizes, I took the 350g burger which is a very big burger. The result was that both sandwiches were spiced perfectly and were full of flavor, and cooked to perfection.

The fries and onion rings were industrial, but were prepared nicely and went great with the dipping sauces they make in-house every day. The prices are very reasonable and the service is great. The guys behind the counter make you feel at home and give you a real feel that your a part of the family. 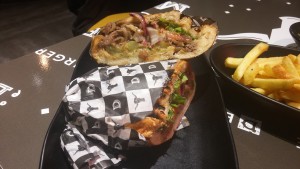 In Israel, finding a kosher gourmet burger is a rarity, so if you find yourself north of Jerusalem in the Givat Ze’ev area, stop at the gas station and grab a great bite to eat.