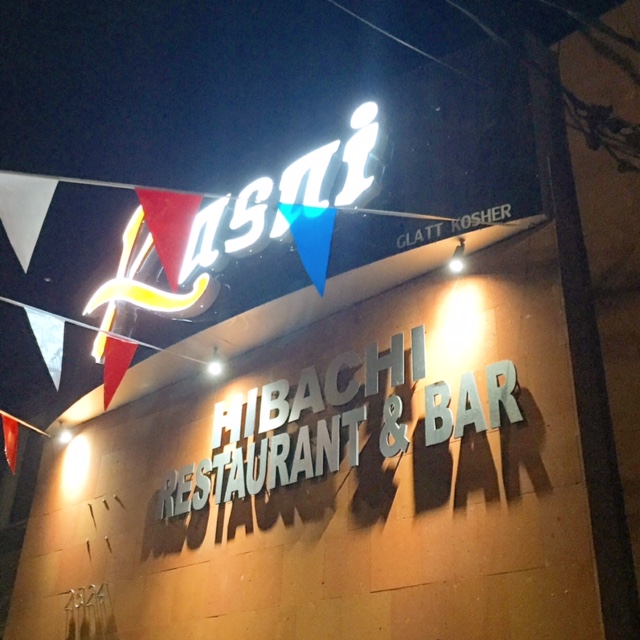 Currently under its “soft opening” stage, Kasai is a brand new glatt kosher hibachi restaurant modeled after the likes of the popular non-kosher Benihana restaurant chain.

Kasai contains 6 hibachi tabletop grills with 8 seats around each hibachi. Starters (cold & hot) and sushi are ordered off of the menu and delivered to your seat. If you order any of the meat to be grilled on the hibachi, a hibachi chef will come to the table and start a show consisting of utensil tricks, throws, percussion, fire displays, and onion fire volcanos (see video below). The chefs like to have fun with the diners at their table by making jokes and squirting sake into the mouthes of willing participants from afar … or launching food at open mouths attempting to catch it.

The cold starters menu is similar to that of a typical Japanese / sushi restaurant. I tried the Trio Sashimi Taco which was served on a puffed taco shell and was tasty.

The hot starters menu only offers 4 items, but if they’re all like the one I tried, that’s all they need. The Classic Yakitori – street style chicken skewers – were delicious!

The sushi menu, while not extensive, does cover the basics, and includes a few fun rolls. I tried a nontraditional roll, the Kasai Roll, which was plated beautifully and was full of flavor. 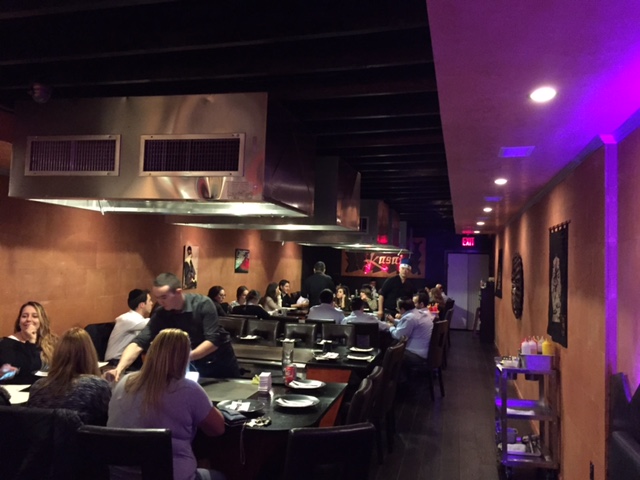 To get the hibachi experience, you needed to order from the Hibachi Dinner menu which included chicken, steak, and lamb options. In seeking a lean steak, I ordered the Hibachi Samurai Steak (ordered medium rare, of course) which is prepared and served (as with all of the hibachi dinner meals) with hibachi clear fried rice & veggies. The seasoning on the rice, prepared with eggs, and veggies was better than most that I’ve had at other Asian restaurants. The steak was tender & juicy.
I also tried the white peach sake, which has a very low alcohol content, and was very tasty, especially if you like Peach Snapple. It was very sweet.

My only gripe with the meal was the prices. The relatively small size of the meat main dish compared to the sides on my plate meant I was paying equally for meat & rice, although, the prices seem to factor in the hibachi experience into the cost of the meat dishes. Having said that, I left satiated & satisfied having enjoyed quality food and some entertainment.

Apparently, “Hibachi” is Japanese for “putting on a show.” Soft Opening at the new Glatt Kosher Kasai in Brooklyn.

Posted by YeahThatsKosher.com on Wednesday, November 4, 2015

My one note to the restaurant, and future patrons: service is included on the bill, no matter the size of your party. Whether this is intentional or not, I don’t know, but I’m no fan of restaurants attempting to collect tips twice on the bill. I will give Kasai and its owners the benefit of the doubt since they were very friendly, gracious hosts.

Kasai is a fun experience for groups of 4-8 and can also be enjoyed by a couple, assuming they want to get to know some strangers. This is not a place I would recommend for first dates or romantic dates – there’s little privacy, and the chefs can be a bit loud & rowdy.

Due to the unique seating arrangements, reservations are highly recommended, especially for groups.

Kasai is kosher under the supervision of Kehillah Kashrus.

(Scroll down for location info / map)