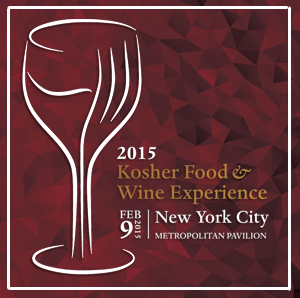 Having attended and reporting about this event since 2011, I noticed that this year’s major change (the venue), was a bit smaller than Chelsea Piers, and the event felt very cramped. It was amazing seeing my fellow kosher bloggers and friends, as well as the multitude of kosher restaurants with their dishes on display.

Before I get into the best dishes I tried, my disclaimer is that it was nearly impossible for me to try everything at KFWE. There were more food vendors this year than ever before (I think) and there was no way I was able to eat that much. Strategically, I made sure to hit (nearly) all of the restaurants with tables, as well as some other booths that I know I’m going to get good food at (specifically the deliciousness that emanates from Ari White’s creations via Gemstone Catering / Wandering Que – yes I’m a fan boy). But even with that said, there were some tables I avoided, including most of the dessert-only tables, and the falafel from Pitopia (which I know is generally good, but I work down the block from their 37th street store, and I wasn’t wasting stomach space on falafel).

With that said, enjoy the visual display of delicious goodness.

The following Kosher restaurants shined at the yearly Kosher Food & Wine Experience (in no particular order):

From #KFWE: Brisket tacos from @carlosandgabbys1 – surprisingly one of the better dishes.

#Kosher "Caviar" imported by the owners of Chagall Bistro from Russia to #KFWE. This was a true example of molecular gastronomy that you need to try.

There were many others I posted to Instagram that didn’t necessarily make this list.  Let me know in the comments below if you think I missed any good ones.