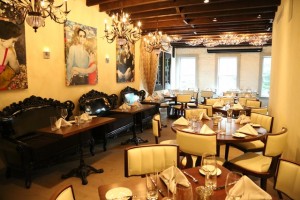 The posh downtown restaurant formerly known as Jezebel, “J Soho” or “The J”, is closing its doors later this week (after Thursday). This may not come at a shock to those who have read their Yelp reviews and to many who have recently eaten there. (See below) While I did have a positive experience back in January, there were many who didn’t share that experience.  The restaurant will reopen as a non-kosher entity after its close.

While its concept was definitely unique for the kosher world: the decor, bar (w/sommelier), menu items, etc., it did not fully catch on with the orthodox Jewish community and hit initial snags with problem chefs and a kosher supervision that was not as widely held as they would have liked. The prices were also a bit of a concern for most who visited the restaurant.

They removed the name Jezebel after switching kosher certifying agencies to the OU earlier this year.

Perhaps as a sign of what was to come, last week while hosting an event for ~100 kosher food writers and professionals (us included), the restaurant sent out lackluster dishes that disappointed most in attendance.