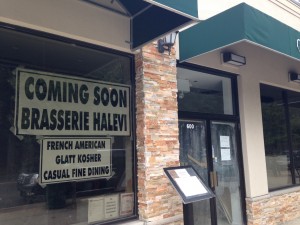 Much to the excitement of many, the Five Towns will soon be home to yet another kosher restaurant! Brasserie HaLevi, a new restaurant on Central Avenue, will have gourmet American cuisine with a French influence and is set to open this September 2013, replacing Off The Grill which previously occupied that large space.

Brasserie HaLevi will be under the kashrus supervision of the Va’ad of the Five Towns.

Check back here for more information once they open!