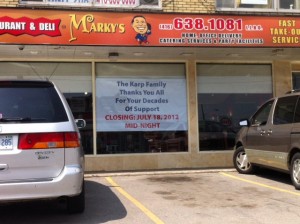 Long a mainstay in the Toronto Jewish community, Marky's Deli & Restaurant has been around since 1969 (that's 43 years for those not doing the math), and will close this Wednesday, July 18th.

The economy was cited as a reason for closing by the stores owners.

Recently, Toronto has lost nearly all of its Kosher meat restaurants: Umami Fusion, 398 West  (aka "Gladdstones"), The Miami Grill, King Solomon's Table, and Delicacies Bar and Grill have all closed in the past 2 years. Additionally, in the past 5 years, Toronto has also lost the following kosher meat establishments: Bais Burger, Shalom Shanghai, The Fortune Cookie, Colonel Wong, and Jerusalem Restaurant 2.

While it may not seem like a lot to someone from New York or LA, for an out of town community like Toronto, it is difficult. There simply aren't many quality choices available anymore.

In reading comments on Facebook by Toronto natives, reaction was mainly of disappointment, however some expressed their understanding due to poor service. Regardless, for Toronto Jews, Marky's will be missed.