The following is an account of one of our community members who survived last month’s Oslo terrorist attack. The person wishes to remain anonymous. 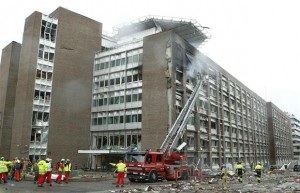 On July 22nd, 2011 Norway was hit with the deadliest terrorist attack its country has ever seen – and I was in the middle of it. At about 3:25pm, a politically motivated Norwegian triggered the explosion a bomb in Oslo’s government quarter and massacred over 70 teenagers at a youth camp a few hours away.

When I finally returned home to New York three days later, I decided to put the whole event behind me. I told a few friends and family but played it down, I’m not really sure why. Over the past two weeks I started getting hot flashes, nightmares, and anger triggered at random and after speaking to a few people, I’m confident that by keeping it in, I’m hurting myself.

I’d like to anonymously share with you what happened that day, I think it will help me move on but at the same time, save the memories for the rest of my life and I want to thank YeahThatsKosher.com for allowing me to share this.

I’ve traveled to over 20 countries and visited more than half the states in the USA. In my opinion, besides for Israel, Norway has to be the most beautiful country in the world. The Norwegian people definitely contribute to this as they are extremely hospitable, sweet, and their hands are always over extending.

On Friday, I decided to spend my last day in Oslo as my flight back to mainland Europe was scheduled to leave at 5pm (mind you Shabbat started extremely late). I spent the morning visiting the gorgeous Opera house, walked up Karl Johans Gate, checked out the royal palace and wandered around the government quarter. At 3pm I sat down for lunch at a nice cafe a few blocks from the Israeli Embassy near the government quarter. The restaurant had WiFi so I video chatted with my parents over Skype from my iPhone to wish them a Shabbat Shalom. About 20 minutes later the whole building shook and we heard 2 explosions coming from a building a few hundred yards away.

At first, I thought it must have been thunder or a car crash close by, but then the streets started filling with smoke and debris. I was reliving September 11th (2001) all over again. All kinds of ideas and and rumors were being thrown around: terrorist attack, plane crash, bombing, car bomb, anarchy and more. Chaos and havoc are not the words I can use to describe what was going on at that minute. Later on I realized this was because Norwegians are not familiar with violence on this scale, at least not since WWII.

As a Jew, my first thought was to head to the Israeli Embassy. I’m not an Israeli citizen, but I figured they can at least give me some shelter or help me get out of the city. After running for one block, I realized the Israeli Embassy was on the other side of the government compound and I would have to run through the blast zone to get there. Not knowing if there would be another attack, I decided this was a bad move so I started running south towards the Oslofjord so I could try and hop on a ferry out of the city. I grabbed my phone and sent a quick text to my parents “I’m OK, getting out of the city, will call when I’m safe” just to keep their minds at ease while I get out of the blast zone.

I started running and arrived at Karl Johans Gate, the main avenue in Oslo. The day before this street, lined with parks on both sides, were filled with hundreds of tourists and locals shopping, eating and having a great time. There are street entertainers, dozens of high class clothing and shoe stores, many restaurants, cafes, and bars. The Gate leads from the Central train station by the water up to the magnificent Royal Palace. That rainy Friday, the air was filled with smut, papers and people covered in dust from head to toe. While heading south I was pushed into a building, hurt my hand and shattered my watch. Everyone was terrified and confused, including me. I tried getting some answers but everyone had the same questions so I ran inside a McDonalds, cleaned all the smoke and dust of myself and continued south towards the water.

When I got to the central station by the water, I found out about the second attack at a youth camp a few miles north which left over 70 teenagers dead. My flight from Oslo was cancelled and and my parents were calling me over and over again. After hearing about the second attack and I knew I needed to leave Norway ASAP and if I couldn’t get over the Atlantic, at least I could get back to mainland Europe. I found a flight leaving from mainland Europe, so a few of us jumped onto on a ferry heading south, out of Oslo. I was going to head to Amsterdam and from there head south if I could find a flight back to NY.

Much later that night, I arrived in Brussels where I spent my Shabbat and on Sunday I got the last seat on a Delta flight back home to New York.

I’ll be honest, writing this was not easy. I had to start and stop a few times, collect my thoughts and keep going. I’m still not sure if a lesson can be learned here, but there’s one feeling that stayed consistent throughout the whole ordeal. That G-d was watching over me.

From the moment the bomb went off, until I got off that flight at JFK I kept thinking one thing, that an hour before that bomb went off, I was standing a few feet from the blast radius. But thankfully, I am home safe.

Flying via Amsterdam to Israel – Tips for your Stopover
Shavuot in Rome, Italy
Comment