Update (2/25/11): 24-yr-old Israeli, Ofir Mizrachi, is reported to have been killed when masonry fell on the car in which he was travelling with three other Israelis. 12 other Israeli nationals are still reportedly missing after the recent earthquake.

This is very sad news coming from New Zealand which just suffered a major 6.3 magnitude earthquake, killing dozens, and destroying much of the city. A young, unnamed Israeli backpacker from Hadera was killed in the quake.

The Chabad of New Zealand has posted to all in Christchurch:
IF YOU ARE IN THE EARTHQUAKE ZONE PLEASE HEAD TO LATIMAR SQUARE WHERE THE CHABAD AND THE ISRAELI EMBASSY ARE SETTING UP AN EMERGENCY MEETING CENTRE 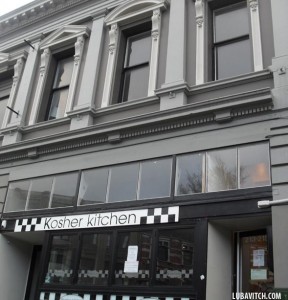 Original Article can be found on: www.algemeiner.com Author: Maxine Dovere

Two and a half months ago, when Rabbi Shmuel Friedman arrived at Chabad of Canterbury to join Co- Directors Rabbi Menachem Goldstein and Sara Goldstein to bring Yiddishkeit to the Jewish community and the twenty thousand Israeli “backpackers“ arriving in the South Islands annually, he could hardly have anticipated being part of an such a momentous earth moving event.

The earth did, indeed, move.

Christchurch, New Zealand, the country’s second largest city, suffered a 6.5 level earth quake which shattered and toppled buildings, destroyed city infrastructure, and caused many deaths. This temblor followed a September event which despite its 7.4 rating was less destructive. In this latest event, 65 are reported dead, many are injured and (as of Tuesday night, New Zealand time) at least 100 remained trapped in the rubble of collapsed buildings. Among those killed is a young Israeli traveler, reportedly from the city of Hadera. His name has not been released.

Prime Minister John Key called the city “a scene of utter devastation,” saying “We may well be witnessing New Zealand’s darkest day.” The 6.3-magnitude quake which shook New Zealand’s South Island has caused extensive damage. The sea, too, has been affected: more than 30 million tons of ice broke away from the Tasman Glacier, New Zealand’s biggest.

Chabad is working in cooperation with the members of Canterbury Hebrew Congregation to attend to the needs of the community. For the second time, t he building housing the Chabad Center has tumbled. An emergency center has been established in Latimar Square, a center city park. Calls are being made to alert travelers to stay away from the city and to call parents and report their safety.

Chabad is “a home away from home” commented Goldstein, Chabad’s New Zealand Co Director, and shliach in New Zealand for four years. “The timing is somewhat miraculous,” he continued, “There were over 100 guests for Shabbat. Only three people were in the center at the moment of the quake and all are safe.” Efforts immediately turned to finding and accounting for the thousands of young Israelis in New Zealand. (One, as noted, was killed by falling rubble. The car in which he was traveling was hit.)

Contact information and personal details were gathered and presented to the Israeli Embassy in Wellington. With the airport shut down, Shemi Tzur, Israel’s Ambassador to New Zealand, has been unable to travel to the site of the disaster by air, but is scheduled to arrive by car. He has asked Israeli travelers to leave the city. The Foreign Ministry estimates that 120-150 Israeli travelers were in Christchurch at the time of the quake, and is working to contact them.

“In the aftermath of the quake,” Goldstein told the Algemeiner, “a number of Israeli backpackers, many of them recently active IDF members, ran into collapsing buildings to help with the rescue efforts. They have saved many lives, incurring minor injuries in the process.”

In New York, a spokesman for the Israeli government conveyed to the Algemeiner that Foreign Minister Avigdor Lieberman had spoken with his New Zealand’s Foreign Minister Murray McCully and expressed Israel’s condolences to the people of New Zealand and offered to send aid to the devastated city. As authorities continued to assess the city’s needs, Israel, said the spokesman “stands ready to assist.” Support in the form of supplies and equipment has been proffered. Prime Minister Benjamin Netanyahu has instructed that efforts be made to see how Israel can “help local authorities in rescue missions and help Israelis.” ZAKA has also offered its services.

The community shul, the “Canterbury Hebrew Congregation has, according to its vice president, sustained an undetermined amount of damage. No other deaths or serious injuries are reported. “People are in shock but coping.” “Many parents are calling and are on the internet trying to locate their children. Over 100 backpackers have emailed the Chabad website which is carrying an alert instructing people to contact parents immediately,” according to Goldstein.

All members of a delegation of 43 American government, business and community leaders in Christchurch for a United States New Zealand Partnership Forum meeting is believed to be safe.. Nine U.S. Congressmen attending the meeting were reported to have left the city before the quake struck.

Rabbi Goldstein urges that “everyone to pray for the victims of this terrible tragedy, many of whom remain trapped in the rubble.”