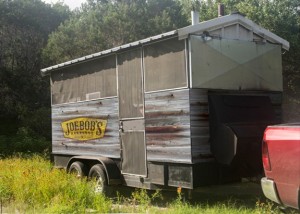 UPDATED: This is officially opened of Jan 29th.

After months and months of preparing, a new kosher truck (trailer really) is being added to the limited Kosher scene in Austin, TX: Joebob’s BBQ. The truck has just received their permits from the City of Austin, and will be kashering the truck in the coming weeks. They expect to be full operational by mid-January (barring any setbacks), which should be helpful for those attending SWSX in March 2015. They will announce their official launch date on their website.

The truck will be located in the parking lot of the Dell JCC, but is available for events and catering.

Kosher supervision will be provided by HKA (Houston Kashruth Association).