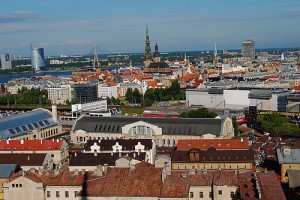 Kosher Info: In the basement of the Jewish Community Center, 6 Skolas Street, is a Kosher restaurant called Cafe L'Chaim, the only Kosher place in Riga.  There's some interest in starting a new place, but nothing yet.  This restaurant is fleisch, moderately priced, and has pretty good food.  They have a beef section on the menu but i don't think they've actually had beef in years, only chicken and fish are available.  There are a couple of vegan restaurants as well, but with a legit kosher place, I didn't check out the other places.

Travel Info: Riga is called the "gem of the Baltics" – although that's their tourism board's definition. The tourism board has a list of suggested itineraries for people traveling in the whole of Latvia that are interested in a variety of things – museums, hiking, art, depending on how you're traveling (by bike, train, foot, etc)… They also provide a "Top 15" list for anyone visiting Riga itself (warning: opens as a PDF). Travelocity also has a list of attractions for the city and there's a lot for everyone – museums, scenic views, art galleries..

Jewish Info: Riga has an active shul with daily shacharis and mincha/maariv. This one's in the old town on Pietivas street called the "Peitav Shul" or the "Riga Synagogue".  The rabbi of the shul is the local Chabad rabbi, a very friendly guy who will have you over for Shabbos meals.

There are a mix of shul-goers including some younger families, some of whom live a good distance from shul but walk in anyways.  There used to be more than 40 shuls in Riga and Jews are scattered where the shuls used to be, but now trek in to the Pietav Shul on Shabbos.  This shul was not burned down by the Nazis because of concerns it would destroy the buildings around it in the old city. The Jewish community here is a bit stronger than in Vilnius – there are two Jewish day schools, a Jewish community center which houses a museum and various social events.