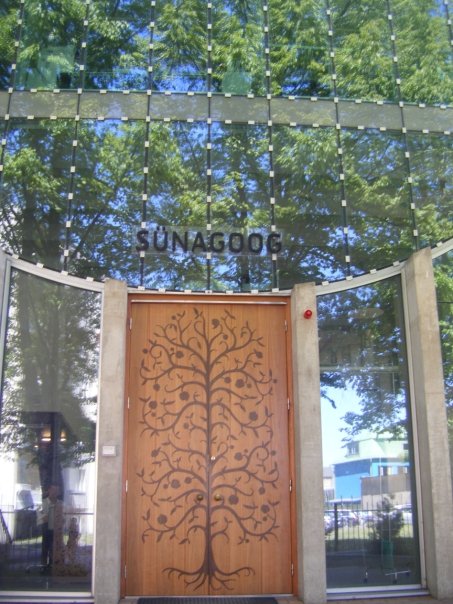 Kosher Info: Of all the places we never thought we’d find a fancy kosher restaurant, Tallinn was one of them. Lo and behold we found Moses a beautiful Israeli owned restaurant located within Tallinn’s beautiful synagogue. Walking in the synagogue took our breaths away more on that later. Moses offers haute cuisine at haute prices. We had a delicious meal that took quite a bite out of the wallet but as it is the only kosher restaurant around we had no choice. Beware they even charge for water. The menu is small but they offer wine and a few chicken dishes some Israeli dishes, fish and beef dishes. It’s definitely an experience worth having. In terms of finding other food there isn’t much so make sure you bring lots of food with if you are having an extended stay because Moses will eat away your wallet otherwise.

Tourist Info: Tallinn is fairytale perfect. The medieval city is full of beautiful cobble stoned streets, castles with turrets, and architecture that takes your breath away. There are antique shops galore and stores full of novelties like Faberge replica eggs and intricately painted babushka dolls. The Eastern European flavor and centuries of history is redolent in the air. If you go at the right time you may even make it for the old town days when everyone is dressed in medieval costumes and merchants sell their wares on the streets.

Estonia has some fabulous tourist attractions. They are also a really great place to indulge in some spa treatments since the prices are ridiculously cheap.

Check out Kiek in de Kok. My husband thought this was the funniest thing ever. It is a medieval fortress that was used to fortify the city and it means in lower German “peek in the kitchen”. It is four or five floors full of interesting artifacts from the fortress and medieval times and a gives a good perspective on Eastern European history and the region.

Fat Margaret is a round dome shaped fortress at the beginning of the old city.

We went to this spa called Nalne Beauty Salon. We both had fabulous massages and I had an amazing facial the whole thing with tips cost about a $170 dollars; in the States it would have been much more.

In terms of accommodations Estonia is dirt cheap. While on the rest of our trip to Europe we stayed in hostels, but in Estonia we were able to stay in actual hotel that was nice and clean with a hot towel bar in the bathroom! (after staying in hostels these things become very exciting)

Because Tallinn is truly medieval you can have a blast just walking around taking in the sights. Check out the fun pink parliament building too.

Tallin is really a fabulous city make sure you get there before the secret gets out.

Jewish Info: As mentioned above Tallinn has a beautiful brand new synagogue that was constructed in 2007. In the 1800’s Tallinn had a thriving Jewish community with a synagogue, butchers , mikvaot, a cultural center and Jewish schools. In WWII the synagogue was destroyed and Estonia was the first country declared by Nazi Germany to be Judeinfrei- free of Jews. In 2007 a synagogue was finally rebuilt providing a place for Tallinn’s Jews to worship. As mentioned there is also an onsite restaurant, a museum, and a mikveh. The shul is also known as Congregation Beit Bella. It is affiliated with Chabad Lubavitch. getting a tour is not so easy. When we were there we wanted to see the magnificent glass structure but were told by the scary security guard in halting English that, it was not allowed. I guess we’ll have to make a trip back. For more info on the shul check out. http://www.chabad.org/centers/default_cdo/aid/118417/jewish/Estonian-Jewish-Center.htm